An Architecture for the Homeless

An Architecture for the Homeless

A Means of Healing

Standard Homeless Solutions aim to transition people from homeless tent camps to “normal”
residential environments in apartment buildings, hotels, or group homes. This works for people for
whom the issue is paying the rent. But what about the other factors that hinder the homeless from
leading “normal” lives. 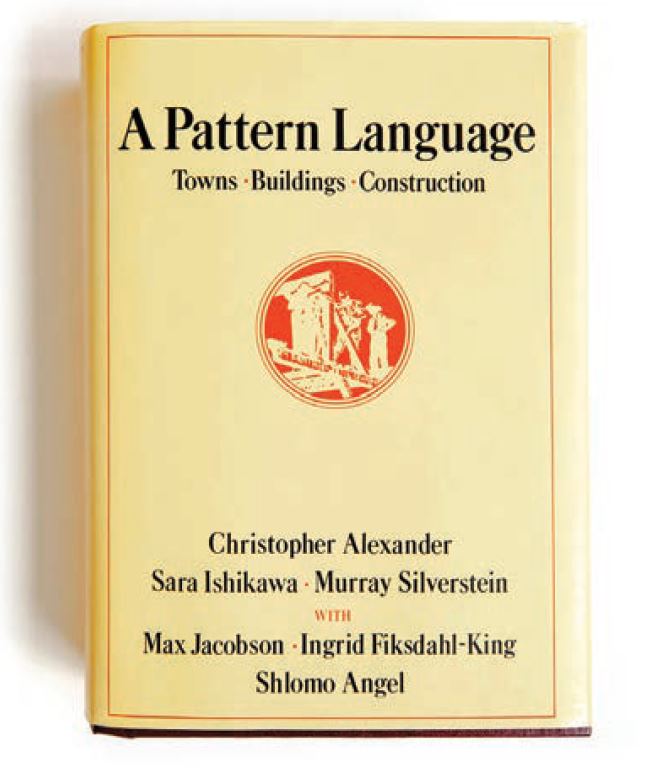 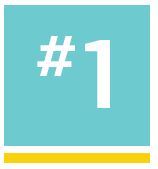 Build in Small Clusters of Homes

People will not feel comfortable in their houses unless a group of houses forms a cluster, with the
public land between them jointly owned by all the households. This pattern is based on the idea that the cluster of land and homes immediately around ones own home is of special importance. It is the source for gradual differentiation of neighborhood land use, and is the natural focus of neighborly interaction.

The most obvious and tribal-like cluster — the homes on either side and across the street — forms roughly a circle, and it is there that most contact occurs. The clusters seem to work best if they have between 8 and 12 houses each.

Arrange houses to form very rough but identifiable clusters of 8-12 households around some
common land and paths. Arrange clusters so that anyone can walk through them, without feeling like a trespasser. 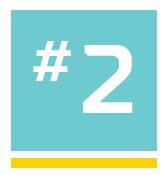 Design the smallest possible code compliant dwelling for an individual or couple or small family.

House for One Person (Pattern 78)

Once a household for one person is part of some larger group, the most critical problem which arises is the need for simplicity. (P. 390) The kind of place that is most suited to one persons
needs, and most nearly overcomes this problem, is a place of the utmost simplicity, in which only the bare bones of necessity are there: a place, built like a ploughshare, where every corner, every table, every shelf, each flower pot, each chair, each log, is placed according to the simplest necessity, and supports the persons life directly, plainly, with the harmony of nothing that is not needed, and everything that is. 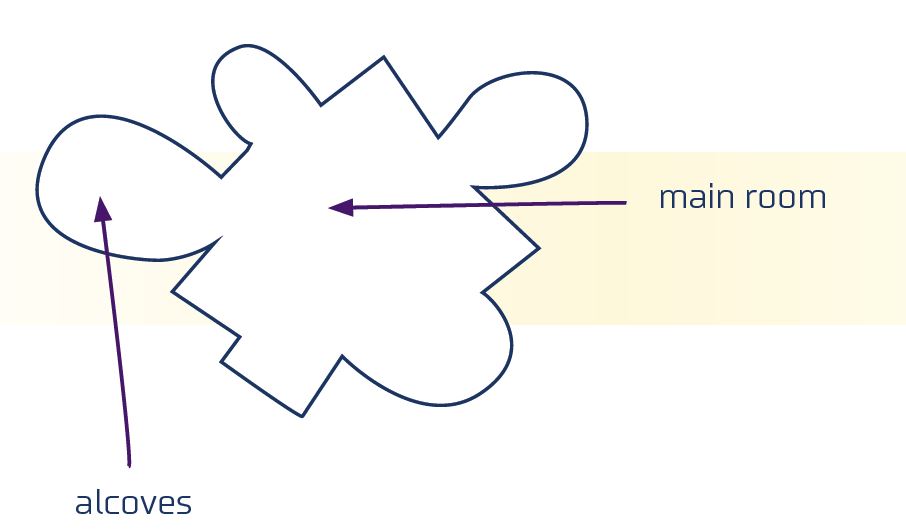 House for a Couple (Pattern 77)

Conceive a house for a couple as being made up of two kinds of places — a shared couples realm and individual private worlds. Imagine the shared realm as half-public and half-intimate: and the private worlds as entirely individual and private. (P. 387)

House for a Small Family (Pattern 76)

Give the house three distinct parts: a realm for parents, a realm for the children, and a common
area. Conceive those 3 realms as roughly similar in size, with the commons the largest. (P 384) 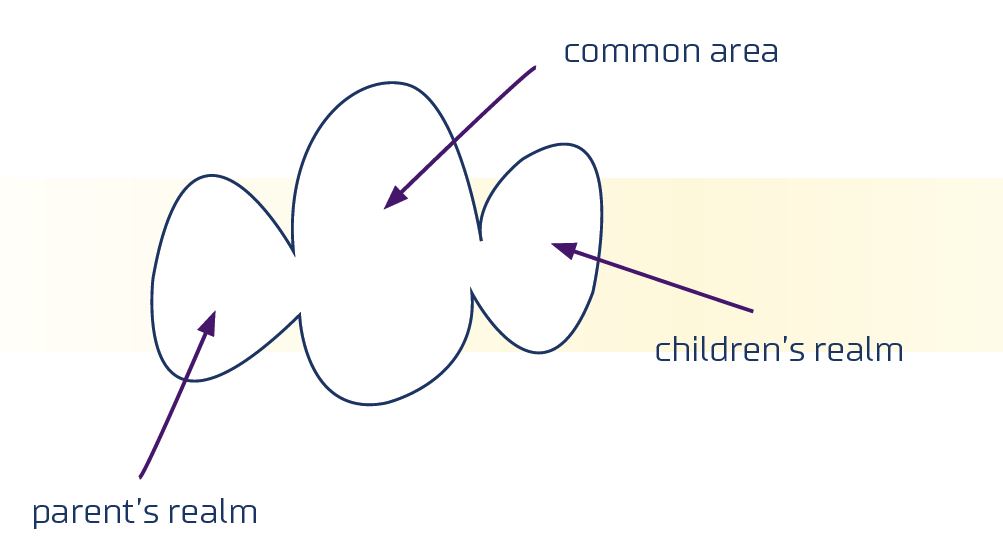 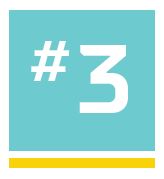 A Mix Of Households

No Stage in the life cycle is self-sufficient.(P. 189) People need support and confirmation from people who have reached a different stage in the life cycle, in a time that they also need support from people who are at the same stage as they are themselves. (P.189)
Present housing patterns tend to keep different types of households segregated from one another. This means that we have corresponding areas of single people, couples, and small families segregated by type. (P.189)
On the other hand, when the balance of life cycles is well related to the kinds of housing that are available in a neighborhood, the possibilities for contact become concrete. Each person can find in the face to face life of his neighborhood at least passing contact with people from every stage of life. (P. 189) 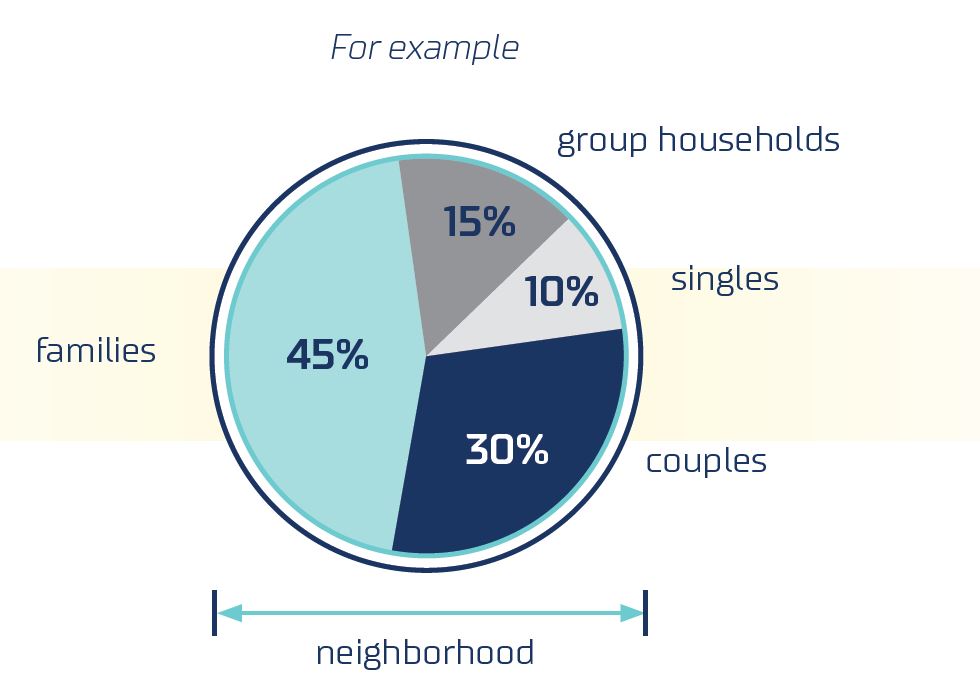 Old people need old people, but they also need the young, and young people need contact with the old. (P. 316)

There is a natural tendency for old people to gather together in clusters or communities. But when these elderly communities are too isolated and too large, they damage young and old alike. The young in other parts of town, have no chance of the benefit of older company, and the old people themselves are far too isolated. (P. 316)

Clearly old people cannot be integrated socially as in traditional cultures unless they are first integrated physically – unless they share the same streets, shops, services, and common land with everyone else.(P. 317)

People are different, and the way they want to place their houses in a neighborhood is one of the
most basic kinds of difference. 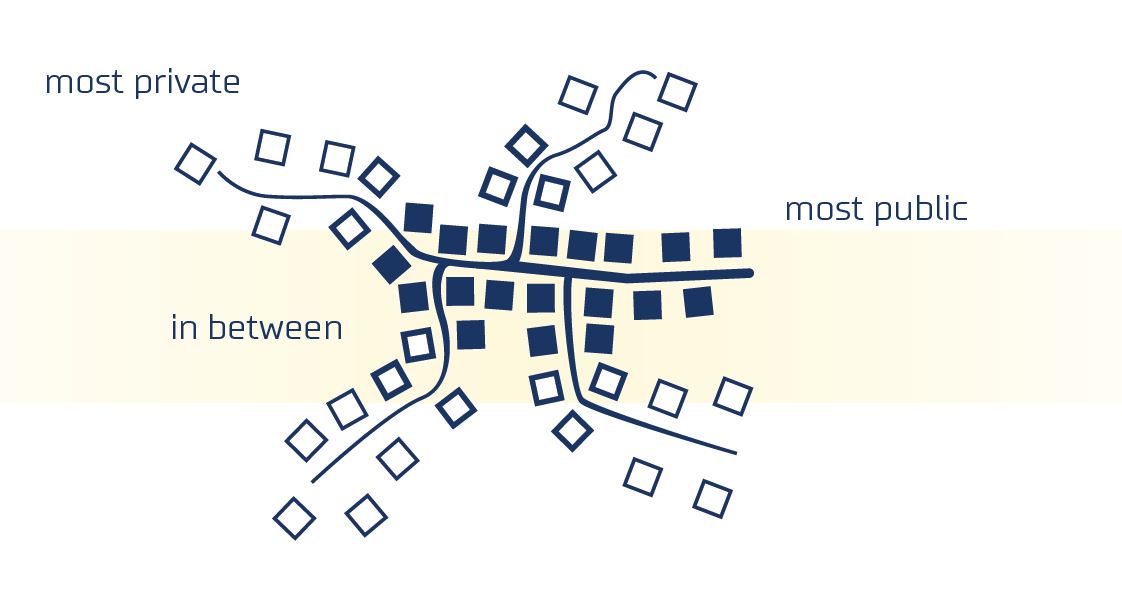 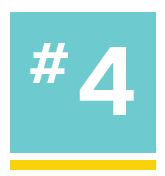 Above 15 houses per acre, it is almost impossible to make houses freestanding without destroying
the open spaces around them. Row houses solve these problems. But row houses in their conventional form, have problems of their own. (P. 205)

Because of the long party walls, many of the rooms are poorly lit. The houses lack privacy — there
is nowhere in the houses or their yards that is very far away from a party wall. The small yards are
made even worse by the fact that they are at the short ends of the house, so that only a small portion of the indoor space can be adjacent to the garden. And there is almost no scope for individual variation in the houses, with the result that terraces row houses are often very sterile. (P. 205)

These four problems of row houses can easily be solved by making the houses long and thin, along
the paths, like cottages. In this case there is plenty of room for subtle variations from house to house — each plan can be quite different; and it is easy to arrange the plan to let the light in. (P. 206)

High-rise living takes people away from the ground, and away from the casual everyday society that
occurs on the sidewalks and streets and on the gardens and porches. It leaves them alone in their
apartments. The decision to go out for some public life becomes formal and awkward, and unless
there is some specific task which brings people out in the world, the tendency is to stay home, alone. The forced isolation then causes individual breakdowns. (P. 116) 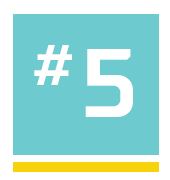 In the heterogeneous city, people are mixed together, irrespective of their life style or culture. This seems rich. Actually it dampens all significant variety, arrests most of the possibilities for differentiation, and encourages conformity. It tends to reduce all life styles to a common denominator. What appears heterogeneous turns out to be homogeneous and dull. (P. 43)

In a city made of a large number of subcultures relatively small in size, each occupying and
identifiable place and separate from other subcultures by a boundary of non-residential land, new
ways of life can develop. People can choose the kind of sub-culture they wish to live in, and can
still experience many ways of life different from their own. Since each environment fosters mutual
support and a strong sense of shared values, individuals can grow. (P. 44)

Therefore do everything possible to enrich the cultures and subcultures of the city by breaking the
city as far as possible into a vast mosaic of small and different subcultures each with its own spatial
territory, and each with the power to create its own distinct life style. Make sure that the subcultures
are small enough so that each person has access to the full variety of lifestyles in the subcultures
near his own (P. 50) 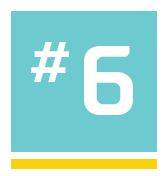 Design for Boundaries from Adjacent Communities

Locate Housing Clusters at the Margins, but with existing physical boundaries to foster acceptance from adjacent communities.

The mosaic of subcultures requires that hundreds of different cultures live, in their own way, at full
intensity, next door to one another. But subcultures have their own ecology. They can only live at full intensity, unhampered by their neighbors, if they are physically separated by physical boundaries. (P 76)

In MOSAIC OF SUBCULTURES we have argued that a great variety of subcultures in a city is not a racist pattern which forms ghettos, but a pattern of opportunity which allows a city to contain a multitude of different ways of life with the greatest possible intensity. (P 76)

But this mosaic will only come into being if the various subcultures are insulated from one another, at least enough so that no one of them can oppress or subdue, the life style of its neighbors, nor in return feel oppressed or subdued. As we shall see, this requires that adjacent subcultures are separated by swaths of open land, work places, public buildings, water, parks, or other natural boundaries. (P 76)

The argument hinges on the following fact. Where there is an area of homogeneous housing in a city, its inhabitants will exert strong pressure on the areas adjacent to it to make them conform to their values and style. For example, the “straight” people who lived near the “hippie” Haight Ashbury district in San Francisco in 1967 were afraid that the Haight would send their land values down, so they put pressure on City Hall to get the Haight “cleaned up” — that is to make the Haight more like their own area. This seems to happen whenever on subculture is very different in style from another one next to it. People will be afraid that the neighboring area is going to “encroach” on their own area, upset their land values, undermine their children, send the “nice” people away, and so forth, and they will do everything they can to make the next door area like their own. (P 76) 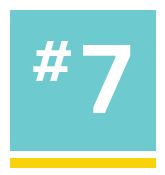 The cell wall of an organic cell is, in most cases, as large as or larger, than the cell interior. It is not
a surface which divides inside from outside, but a coherent entity in its own right, which preserves
the functional integrity of the cell and also provides for a multitude of transactions between the cell
interior and the ambient fluids. (P. 87)

We have already argued in SUBCULTURE BOUNDARY that a human group, with a specific life
style, needs a boundary around it to protect its idiosyncrasies from encroachment and dilution by
surrounding ways of life. This subculture boundary, then, functions just like a cell wall — it protects
the subculture and creates space for its transactions with surrounding functions. (P. 87)

From observations of neighborhoods that succeed in being well defined, both physically and in the
minds of townspeople, we have learned that the single most important feature of a neighborhoods
boundary is restricted access into the neighborhood: neighborhoods that are successfully defined
have definite and relatively few paths and roads leading into them. (P.88)